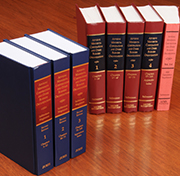 Richard A. Saliterman, Co-author, Second Edition, Advising Minnesota Business Corporations and Other Business Organizations.  This multi-volume, hardbound Second Edition of the work, which came out in November 2011, was co-authored with Roger J. Magnuson, Senior Partner, Dorsey & Whitney law firm, Minneapolis.  Juris Publishing is one of the largest publisher of national level and international level law books.  Brett Larson, of Saliterman & Siefferman, served as Chief Managing Editor and as a Contributing Author.  It should be noted that a number of highly professional, skilled contributing authors and other persons assisted in this State of Minnesota bar-wide, community effort; as was the case in the First Edition.  Some of these persons have continued on to high positions of public service and have become distinguished jurists in their own right.

Richard A. Saliterman, Author, First Edition, Advising Minnesota Business Corporations and Other Business Organizations (four hardbound volumes, one softbound volume or update / supplement).  This set of books has been the principal Minnesota business law practice treatise used by business professionals, lawyers, judges, and academicians.  This First Edition is the first or one of the first such comprehensive business law work ever published in the State of Minnesota involving almost all facets of commencing, operating (often in a state of turbulence), and the demise and termination of businesses of all natures, including both profit and non-profit organizations.  It is believed to be the first of its kind published anywhere outside of New York.   The set was initially written for Michie Butterworth and later published by LexisNexis, one of the nation’s leading law book publishers.

Richard A. Saliterman, Author, Real Estate Lending Requirements and Loan Documentation in Minnesota, Lorman Education Services (2005).  This softbound seminar book deals with the subject of documentation involved in loans, and recourse upon default of loans.

Richard A. Saliterman, Commentator/Reviewer/Author, Report for the Ford Foundation Study on the Public Management of Market Forces, by Professor Lawrence R. Jacobs and Professor Lawrence Brown, of the University of Minnesota (2003).  Mr. Saliterman was requested by Professor Jacobs to be an official commentator or reviewer of his study prepared for the Ford Foundation regarding government regulation of business, much based upon Mr. Saliterman’s own background in these areas.

Richard A. Saliterman, Co-author, The Trusteeship of Legal Rulemaking, 30 Hofstra Law Review, 483, 2001.  This article is co-authored with Professor Edward Adams, Busche Professor of Finance Law at the University of Minnesota School of Law.  The article deals with the phenomenal problems confronting law given what many perceive is the diminishment and lessened “social capital” or cultural strength of the United States of America, which social capital in many respects provides a foundation for American capitalism and business enterprises.  It is presented as a commentary on or review of and amplification of very important societal trends by eminent sociologist and futurist, Professor Robert Putnam of Harvard University in his work “Bowling Alone.”  It has been the law firm’s honor to be called upon by Harvard University when Professor Putnam was in Minneapolis to assemble a small grouping of community leaders for Professor Putnam to present his work and outlook in an atmosphere of substantial candor.

Richard A. Saliterman, Co-author, Survey of the Law of Spousal Rights to Business Property, The Hennepin Lawyer (the official bar journal of the Hennepin County Bar Association), Vol. 66, No. 10 (1997).  This article is believed to be the first article published in Minnesota dealing with the very important but often ignored area by divorce lawyers (especially in advance planning for divorce) of business property and dissolutions of marriage, and the rights of spouses to business assets; and other similar or personal relationships and business ownership problems.

Richard A. Saliterman, Author, Perceptions Bearing Upon the Public Policy Dynamics of Corporation Law, 20 Hamline Law Review 257, 1997.  This article is accompanied by an Introduction written by Professor Harvey J. Goldschmid of Columbia Law School, one of the principal scholars and commentators on a national level and international level on business and corporate law.  The article is based upon basic patterns and trends in the past and issues confronting business and corporate law in the 21st Century.

Richard A. Saliterman, Author, James B. Logan Appointed to Eighth Circuit Court of Appeals, The Hennepin Lawyer (the official bar journal of the Hennepin County Bar Association), January-February, 1991.  This article deals with the appointment of and to an extent is based on the personal philosophical underpinnings of James B. Logan, United States Federal Court of Appeals.

Richard A. Saliterman, Author, Inside View at the Top of the Decade, May-June 1990, The Hennepin Lawyer (the official bar journal of the Hennepin County Bar Association).  This article was a special, enlarged symposium issue.  This issue of the bar journal was intended to present views in separate articles of key members of the Hennepin County Bar Association of what had happened in their respective areas of law in the 1980s; and to provide some insight as to changes in the areas of law to expect and address during the following decade which was the last decade of the 20th century.  It was very much intended as a chronicle or briefing for preparing the Bar for the end of the millennium.

Richard A. Saliterman, Author, Passing Comments of Outgoing Chair, August 1987, The Hennepin Lawyer (the official bar journal of the Hennepin County Bar Association).  This article is intended to invite some insight into the meaning of a bar journal and a bar association for lawyers.  At the time, Chairpersonship of The Hennepin Lawyer Committee, more than other bar journals in the state, perhaps, was considered a significant trusteeship.  The journal contains articles which were written by leading authors and by others, often cited by lawyers, not only in Hennepin County District Court, but throughout the state; with the journal cited in opinions on all Minnesota court levels.

Richard A. Saliterman, Author, Reflections on the Presidential Clemency Power, 38 Oklahoma Law Review 257, 1985.  This article deals with issues involved and considerations involved in granting by President Gerald R. Ford of clemency or pardons for civilian criminal law and military law offenses during or after times of war or insurrection.  This article is written based on the author’s very brief experiences in this area at the conclusion of the Vietnam War while serving as a Lieutenant with the U.S. Navy Judge Advocate General Corps.

Richard A. Saliterman, Author, Reflections on the Presidential Clemency Pardon, November-December 1984, The Hennepin Lawyer (the official bar journal of the Hennepin County Bar Association).  This was written to generally familiarize members of the Hennepin County Bar Association with the work of the Presidential Clemency Board and Clemency Power that the author had and associated with for a very brief period of time, earlier.  It was felt that this decision of President Ford was not well-covered by all media and understood by all lawyers, and much a product of or arising out of and during the very turbulent Vietnam War years.

Richard A. Saliterman, Co-author with Jeffrey B. Robins, Esq., Incorporating Under the New Minnesota Incorporation Act, 52 Hennepin Lawyer (the official bar journal of the Hennepin County Bar Association) 10, Nov.-Dec. 1982.  This article much derived from the seminar for continuing education, which was approximately at the same time presented by author and others; was intended to help members of the bar adjust to and understand the new Minnesota Corporation Act.  The new corporation act was perhaps the most important business legislation in the history of Minnesota since the initial incorporation act several decades earlier.

Richard A. Saliterman, Author, Dissolution and Buy-Out Provisions as Potential Solutions to Close Corporation Dissension, 1974 Utah Law Review 38.  This article was republished in 24 Law Review Digest 15, 1974.  This work is believed to be the first or among the very the first articles ever published in a university law review, or in a university law school associated law review, dealing with what remains a very serious subject of discord, dissention, and litigation within small and medium sized business corporations.  The dysfunctionality and much inapplicability of the then business and corporate law helped worsen this circumstance; and to a significant extent it may still do so today.  The article was written to help fill this legal rule protection vacuum and provide commentary for an advent of more responsive statutes to address it, and written on a nation-wide basis.  It is considered a landmark article on the subject of introducing and recognizing the legal problems of small capitalized and medium capitalized businesses and their owners.  Small and medium capitalized businesses are in many respects very substantially different than large and publicly-held corporations.

Richard A. Saliterman, Author, Some Antitrust Problems in Government Insured / Guaranteed Mortgage Lending, Buffalo Law Review Vol. 23, No. 1 (1973-1974).  This article deals with how U.S. Government policy facilitated loan foreclosures and abuses by some lenders and real estate professionals and other participants in the financial system.  This conduct regarding mortgage financing and financial institution erosion is now the core of the present economic collapse.

Richard A. Saliterman, Author, An Examination of Some of the Factors which Influence the Outcome of Judicial Elections in Minnesota, 1968.  This was the summa cum laude thesis of Richard A. Saliterman written while a student at the University of Minnesota.  It is believed to be the first quantitative analysis of the variables affecting non-partisan judicial elections in Minnesota, and perhaps elsewhere throughout the country.  The same variables or forces found to be in operation were essentially that which were present in partisan or party label type judicial and other elections (when certain controls were placed on the examination, such as for incumbency).  Mr. Saliterman was assisted by then Minnesota Supreme Court Justice Frank T. Gallagher, who, in retired status, was actively writing several opinions for the Court; and by former Dean of the University of Minnesota College of Liberal Arts, and student advisor, Frank J. Sorauf, in the thesis. The thesis examination committee included Political Science Professor/U.S. Marine Corps Reserve General Harold W. Chase and Journalism School Professor Clifford J. Emory.