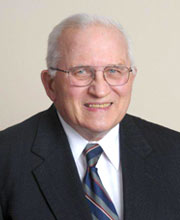 Floyd received his JD in 1960, (Class Valedictorian) from Emory University Law School; BS 1954, a bachelor of science in engineering degree from United States Military Academy, West Point (Phi Kappa Phi and upper 5% of class). He was a Captain in the U.S. Army Corps of Engineers (active duty 1954-1957) and a major in JAG Corps. In addition to his complex issues trial practice, Floyd continues to handle many cases in the appellate courts, and state and federal trial levels. Over his professional career he has handled well over 100 cases in the state and federal appellate courts in the 5th, 8th, and 11th circuits, as well as the United States Claims Court, Court of Military Appeals and three petitions before the Supreme Court of the United States. He is also active in estate and business planning and real estate law and holds a degree in General Engineering.

Floyd’s present practice concentrates on appeals and complex case trial preparation. Floyd has represented large corporations and many individuals in these cases, including airline crash litigation, private aircraft litigation, and engineering faults, such as the I-35W bridge collapse. It is believed that Mr. Siefferman’s interview by the Minneapolis Star Tribune was the first published on the reasons for the collapse (which received worldwide attention).  The litigation has been in both state and federal courts with most of the securities litigation being on behalf of individuals in federal court. For several years, Floyd has served as a Certified Arbitrator for the American Arbitration Association.

Floyd graduated in the upper 5% of his class at West Point and was offered a Rhodes Scholarship (which he declined in order to marry Jane, his wife of 56 years). Floyd served as a Second Lieutenant through Captain in the Corps of Engineers and was airborne qualified as well as a jumpmaster. Floyd resigned his commission in order to go to law school through the Korean War GI bill and graduated first in his class from Emory University School of Law. He joined and became partner in Gambrell, Harlan, Russell, Moye & Richardson, where he did major work for Eastern Airlines and Air France, as well as litigation concerning twin engine aircraft cases and charter carriers, as well as individuals.

Security Law and Constitutional Law, Law Enforcement
Author: “Interception In Telephonic Communications” 8 Journal of Public Law 318, Spring 1959. This is believed to be one of the first university-level law review articles dealing with the subject of telephone interceptions.

Arbitration, Litigation
Co-author: “Recent Supreme Court Decisions Make this the Age of Arbitration,” 59 The Hennepin Lawyer (the official bar journal of the Hennepin County Bar Association) 14 September-October 1989. This article is believed to be one of the first law review articles published on a major pattern or trend of Minnesota courts which is to move litigation into an arbitration rather than a court setting or to move litigation into mediation rather than the full trials; much due to limited judicial resources and the capacity and hopeful result of attempting to help lessen attorneys’ fees. It is also intended to help facilitate business and judicial type matters, as well as other controversies, to perhaps be decided by persons regularly working with judicial rules in the area, thereby also lessening the load of our courts.